Several years ago I published a then-current list of the nine oldest stadiums in the NFL on my other web venture. Well a lot has changed since then so it’s time for an update to that list. The premise here is quite simple: to document the ten currently occupied stadiums that have been open the longest. Got it? Good, let’s read on. 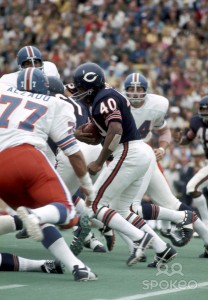 Although the Chicago Bears didn’t permanently move to Soldier Field until 1971 the stadium has been open since 1924, making it far and away the oldest in the NFL. Prior to 1971 the Bears played the majority of their games in the friendly confines of Wrigley Field.

The Bears started their residency of Soldier Field on September 12, 1971 with a home preseason game against the Denver Broncos. The photo you see here of Gale Sayers was taken at that game.

Before the Bears moved in, Soldier played host to a variety of teams such as the AAFC’s Chicago Rockets/Hornets, Notre Dame’s football team (1929 only) and the Chicago Cardinals in their last season before moving to St. Louis. 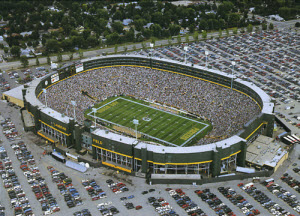 The home of the Green Bay Packers is the still by far the oldest National Football League stadium currently in use. Until 1964 it went by its original name — City Stadium, itself a replacement for an earlier venue of the same name — but was renamed in ’65 to honor Hall of Famer Curly Lambeau, Packers founder and long-time head coach.

The earliest reference I can find to the Lambeau name is from an August 14 preseason game against the Giants, although the City Stadium name was still used on at least one or two programs later in the year.

Lambeau became the Packers’ sole home stadium after 1994, when the team stopped splitting games between it and Milwaukee County Stadium.

With the abandonment of Candlestick Park by the 49ers, the venue formerly known as Oakland–Alameda County Coliseum moves up a spot on the list. It does, however, hold the honor for the oldest stadium occupied by a former AFL team, even if that residency has not been unbroken.

The Raiders moved into the Coliseum after spending time in Kezar Stadium, Candlestick Park, and Youell Field over their first six seasons of existence. The first game played there was against the Kansas City Chiefs on September 18, 1966. The program issued that day, unsurprisingly, heralded the team’s new digs. The Raiders continued to call the Coliseum home until their decade-plus stint in Los Angeles. They returned home to much fanfare for the 1995 NFL season and have remained there since.

The future of this rather run down stadium is very much up in the air, and rumors continue the circulate that the Raiders will either get a new stadium built or once again leave Oakland altogether.

Another team facing stadium issues are the San Diego Chargers, who moved into the then-named San Diego Stadium one year after the Raiders moved. The Chargers moved into their current home after one season in Los Angeles and six in San Diego’s Balboa Stadium, and played their first game there on August 20 (a preseason match against the Detroit Lions). Team owner Alex Spanos has made no secret of his desire for a new home, going so far as to present a proposal that would see the Chargers return to Los Angeles.

Strange how three of the oldest NFL stadiums are used by AFC West teams, is it not? One difference, however, is that the Kansas City Chiefs don’t appear to be in a hurry to leave any time soon. They opened Arrowhead, which replaced Municipal Stadium, with a 24-14 preseason win over the St. Louis Cardinals on August 12. The first regular season game played there was on September 17, a 20-10 loss against the Dolphins.

The venue formerly known as Rich Stadium opened in 1973 and has been the home of the Buffalo Bills ever since. War Memorial Stadium had been the team’s home since their founding in 1960, but after the AFL/NFL merger it was deemed unsuitable for an NFL team. Naming rights were sold to food corporation Rich Products for $1.5 million over 25 years, one of the first deals of its kind. The Ralph has sported artificial turf since its opening, which probably makes sense given its geography and climate. Like the dearly departed Candlestick Park, Ralph Wilson Stadium is infamous for its difficult wind conditions — not to mention the fact that Buffalo is susceptible to the occasional blizzard.

The Louisiana Superdome (as I will always know it) is the largest fixed-dome structure in the world, and was built to be bigger and better than the now-abandoned Houston Astrodome. It was also supposed to be the site of Super Bowl IX, but construction delays forced that game to be moved to Tulane Stadium.

The New Orleans Saints are the dome’s most well-known tenants, although it has also hosted numerous Super Bowls and NCAA football games, as well as MLB exhibition games. It’s also been the host of the Sugar Bowl since 1975.

Most recently, the Superdome was closed during the 2005 NFL season as a result of major damage suffered during Hurricane Katrina in August of that year.

I still remember feeling a bit of sadness when the Miami Dolphins abandoned the historic Orange Bowl for what was then known as Joe Robbie Stadium. Due in no small part to being located in south Florida, the stadium has hosted five Super Bowls for an average of one every five years. The most recent was Super Bowl XLI, which was marred by heavy rains.

When it opened in 1992 the Georgia Dome was the largest domed structure in the world when it opened, but it was surpassed by London’s Millennium Dome in 1999. Its first NFL game action was an Atlanta Falcons vs. Philadelphia Eagles preseason affair on August 23, as seen on this collection of memorabilia from that day. 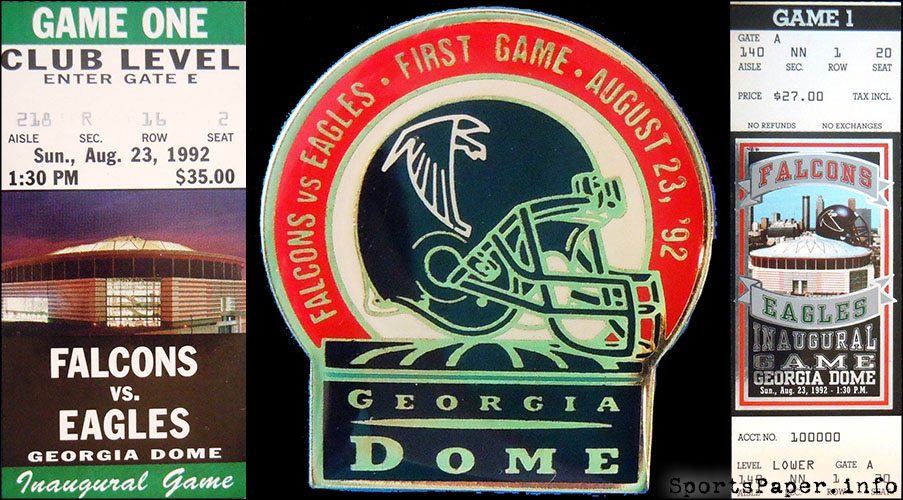 The Georgia Dome’s spot on this list will be lost soon, as the Falcons plan on moving into Mercedes-Benz Stadium in 2017. The Dome will then be demolished to make room for parking. That’s progress I suppose.

Big changes came to the NFL, and with them a few brand new stadiums. The league brought in two new franchises (the Carolina Panthers and Jacksonville Jaguars) and Los Angeles lost both the Raiders and Rams.

While the Raiders moved back to the old Oakland Coliseum and the Panthers did not move into their permanent home until 1996, the Jaguars and Rams started their new lives in what are now the 10th oldest stadiums in the league. EverBank field began as Jacksonville Municipal Stadium and was also Alltel Stadium briefly, while the Edward Jones Dome in St. Louis used to be called the Trans World Dome and the Dome at America’s Center.

While the Jaguars have seen improvements made to their stadium and don’t appear to be an imminent relocation threat, the Rams seem almost certain to abandon St. Louis and their lowly regarded stadium and return to Los Angeles. In fact, depending on when you read this they may already be packing the moving vans. It seems nearly certain that at a minimum the Rams would be moving to a new stadium even if they stayed in St. Louis.

Sports history as told through programs, photos, and other things. Curated by @grayflannelsuit. Become a Patreon here: https://t.co/2rPByxJnGv

They were born in 2008 and started play in 2011. A decade later the UTSA Roadrunners are in the AP Top 25 for the first time. Congrats! https://www.sportspaper.info/wiki/index.php/2009_UTSA_Roadrunners_football_media_guide

Who doesn't love a classic LSU vs. Florida cover? https://buff.ly/33WbrAU