Will this be the year the NFL finally returns to Los Angeles after a two-decade absence? We’ll find out soon enough. But I thought it would be fun to take a quick visual trip back in time to trace the progression of professional football in the City of Angels. So here, through the magic of program covers, is a visual timeline of teams in L.A. I haven’t included every team to ever play in L.A., but these are the ones worth noting.

Little remains of the brief history of the Los Angeles Buccaneers, the NFL’s first L.A. team. The odd thing about the Bucs is that they were actually a travelling based out of Chicago. They only played a handful of games in California, all of which were exhibitions after the 1926 season was over. Very little ephemera from the Bucs’ season remains, although this is purportedly a photo of the team playing the New York Yankees in early 1927.

The first L.A. football team to be based out of the city was the Bulldogs, who bounced between independent and league status during their decade-plus of existence. For all but their final season (1947), the Bulldogs played home games in the now-demolished Gilmore Stadium. Here is a home program from a December 20, 1936 game against the NFL’s Brooklyn Dodgers.

Football teams seem to enter and leave L.A. in pairs for some reason. In 1946 two leagues entered the market — in the process crowding out the Bulldogs — the AAFC’s Dons and the NFL’s Rams. The Dons were of the brand-new AAFC’s charter squads, while the Rams moved from Cleveland after winning the NFL title in 1945. The Dons lasted until 1949, when the AAFC folded, while of course we all know the story of the Rams. Here are a few items from each of the two teams’ first 1946 seasons.

When the new American Football League launched in 1960, one of its eight charter franchises was the L.A. Chargers. History tells us that the Chargers bolted (heh) for San Diego after just one season, of course. Here is an ultra-cool advertising placard for the Chargers’ 1960 home season.

So yes, the Continental Football League’s Ramblers were located in Anaheim rather than Los Angeles proper, but I’m putting them in here anyway. The Ramblers started play in 1967 and folded after the 1968 campaign. Here’s a program from their September 22, 1968 game against the Seattle Rangers.

Here’s another Anaheim team, this time from my beloved World Football League. The Sun and their gloriously bright uniforms lasted for the entire existence of the WFL, the 1974 and (partial) 1975 seasons. Here you can see one of those uniforms as shown on their 1975 media guide.

A few seasons after the Rams left the L.A. Coliseum for Anaheim Stadium, the Oakland Raiders packed up and moved right in. Their stay was comparatively brief, as they returned to Oakland in 1995. Here’s a pocket schedule for the Raiders’ first year in L.A., sponsored by Fatburger.

Things got really crowded in L.A. with the launch of the USFL in 1983. There were now three pro teams in the L.A. area, and two using the Coliseum. Granted, the Express played in the spring. If you’re reading this site you likely know that the Express, along with the rest of the USFL, folded in 1985 after just three tumultuous seasons. Here is a neat Express artifact from their inaugural season, an uncut sheet of home tickets. 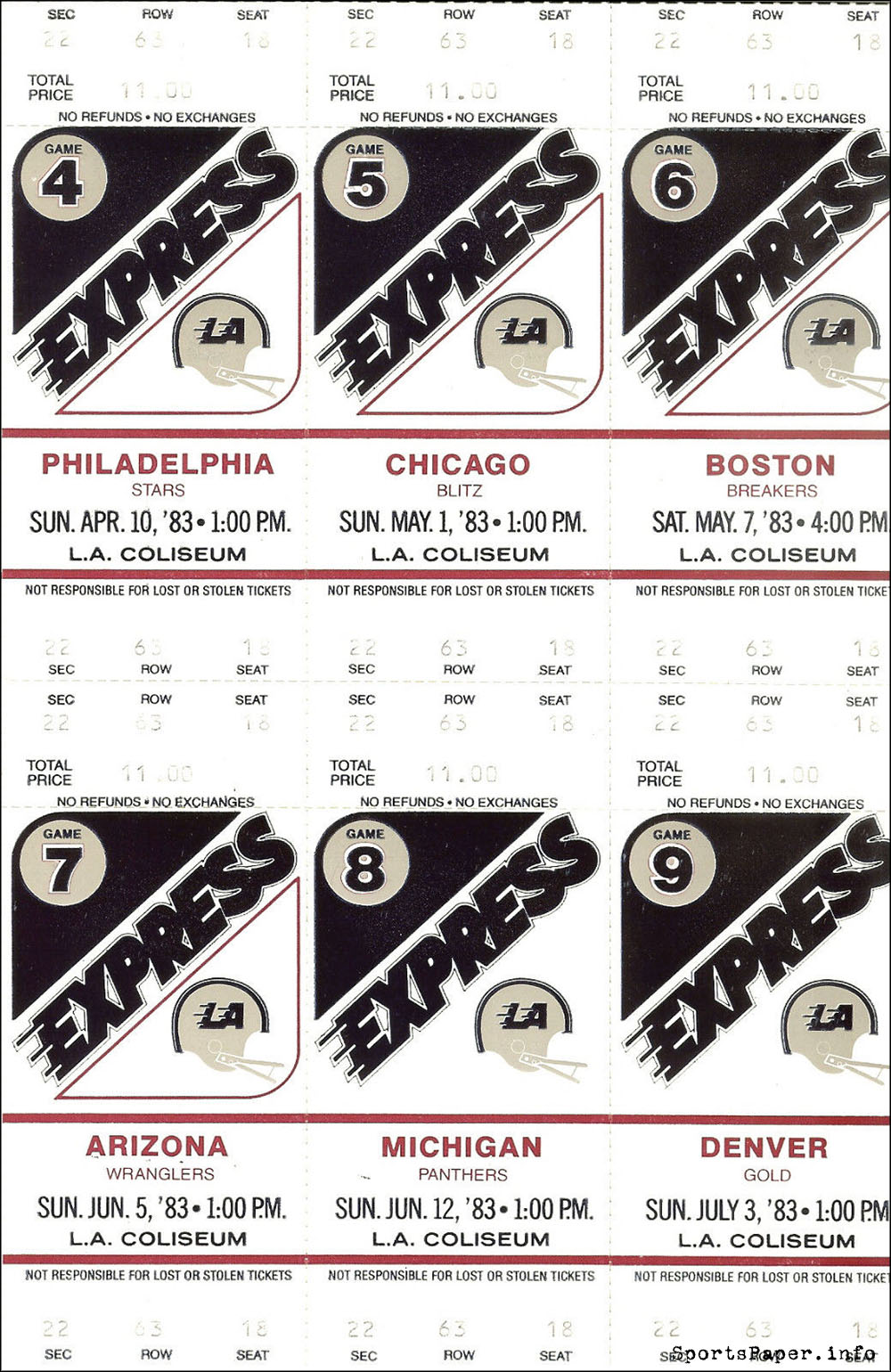 It was one and done for the Arena Football League’s Cobras, who boasted former NFL star wide receiver Cliff Branch on their roster.

The Arena League’s next foray into the L.A. market was a little more successful, but still ended in 1997.

You can be forgiven for almost forgetting about the XFL, because I nearly did too. But they were around for one year, and the Xtreme won the league’s only championship game.

The L.A. Kiss are the fourth attempt by the Arena Football League to make a team stick in that market. They are co-owned by, among others, Kiss co-founders Gene Simmons and Paul Stanley. This effort lasted just three seasons, with the team being liquidated in October 2016.

15 years ago today the White Sox swept the Astros and got back in the World Series win column. https://buff.ly/31K8AcY

#OTD in 1863 the Football Association @FA was formed in London, and formulated the first set of common rules for the sport.

#OTD in 1960 the American League voted to expand to Los Angeles and to allow the Washington Senators to move to Minnesota.